Although the SilverSword Fencing Academy performed a Marko-Polo travelling routine up until June 2014 – moving across the globe to expand the club as well as the techniques and teachings, the 2014 Sydney class exceeded expectations with their turn out in numbers and the rate of progress of their students. The Sutherland SilverSword team proved to be one of motivation, progress and inspiration for their younger teammates. The fencing boot camps were a huge fitness success for our under 15s as well as the adults and parents class. 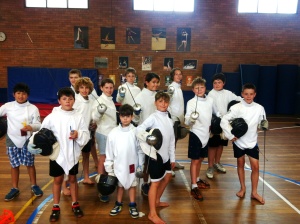 We received a lot of positive feedback for our choice of music during our boot camps and drills. I even caught many of the students dancing to the music, which always creates a positive and happy atmosphere.
This year also saw the return of classes for fencing for screen. We worked with stuntmen and actors to teach and assist their on screen fencing abilities and choreograph scenes for upcoming blockbuster movies.
The SilverSword coaches would like to thank all of the students and their parents for their support, participation and for being a part of the SilverSword team’s motivation and success.
See you in 2015!