Darcy Herod-Welsh Under 11 Champion of the Tri-State Championship

Darcy Herod-Welsh, age 10 was the undefeated under 11s fencing champion at the Tri-State Championships held in Canberra on the 8th of April 2017. Darcy won gold at the tri-state championship which is held annually in Canberra in multiple weapons and age disciplines.
Darcy has been fencing for just over a year. He started at the Silversword Fencing Academy – Helensburgh in 2016. His hard work, team spirit, determination and the right attitude for perfection has raised him to an extraordinary level. 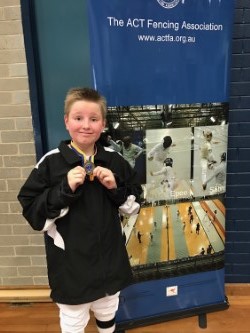 His friendly nature and positive attitude had the whole club following his progress and supporting his success.
Congratulations to all the coaches and the Academy’s supporters. Well done on the fencing championship and efforts in general, Darcy!